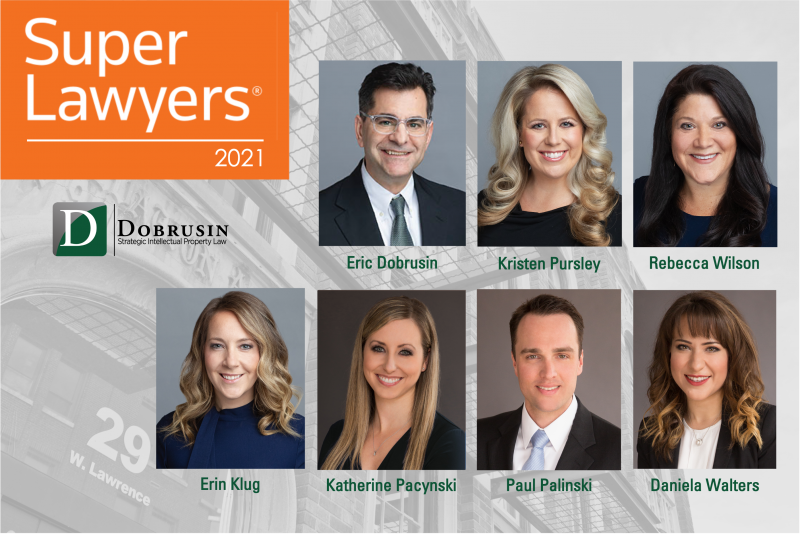 The Dobrusin Law Firm is pleased to announce seven of its shareholders were named to the 2021 edition of Michigan Super Lawyers and Rising Stars.

Founding shareholder Eric Dobrusin focuses his practice on patent counseling and strategic patent prosecution, with an emphasis on materials science. He has appeared on the Super Lawyers list each year since 2006.

Managing shareholder Kristen Pursley concentrates her patent and intellectual property practice on consumer products and packaging. She has been included on the Super Lawyers list annually since 2019 and was named to the Rising Stars list from 2013 to 2018.

Katherine Pacynski concentrates her patent practice on mechanical, chemical, and materials science arts, with an emphasis on nonwoven materials and automotive applications. She has been named to the list of Rising Stars each year since 2019.

Paul Palinski focuses his practice on patent counseling and strategic patent prosecution, especially in the mechanical, electromechanical, and biomedical technology areas. He has appeared on the list of Rising Stars annually since 2016.

Daniela Walters counsels clients on patent matters, drawing from multiple degrees in industrial, mechanical, and systems engineering and her previous career as an engineer in the automotive industry. This is her fifth consecutive appearance on the list of Rising Stars.

Rebecca Wilson focuses her practice on copyright protection, trademark prosecution, and brand management, helping clients safeguard these assets and maximize their investments. She was first named to the list of Super Lawyers in 2020.

Super Lawyers ranks attorneys across over 70 practice areas, selecting the top five percent who have attained a high degree of peer recognition and professional achievement. The Rising Stars list of lawyers (40 years old or younger or have been practicing law for ten years or less) reflects the top two and a half percent of up-and-coming attorneys.

Please join us in congratulating our colleagues!