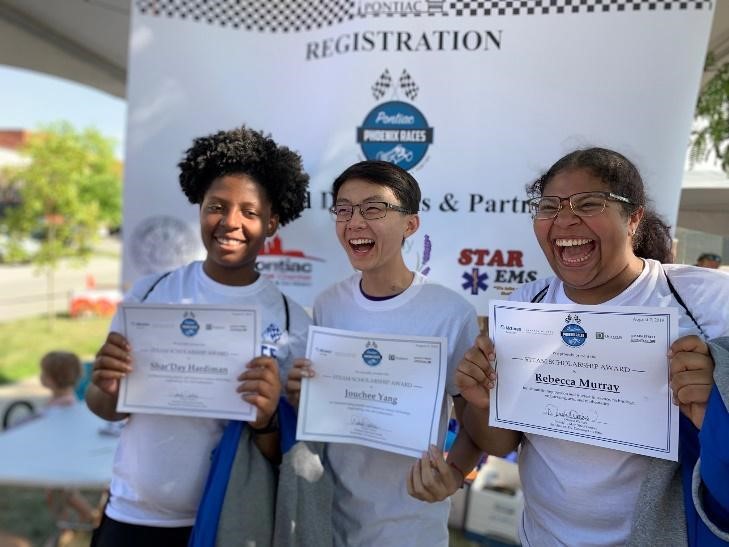 What a great day it was at the 2019 Phoenix Derby Races!

Area middle and high school STEAM students put their minds to work to engineer and build the fastest wooden gravity-powered cars in Pontiac. Races for the checkered flag were hard-fought and the celebrations were well-earned by the students and their professional STEAM collaborators and mentors.

Speeding past the finish line first was team “Burnt Toast,” consisting of middle schoolers, with teams “City Girls” and “Missing Partz” as close second- and third-place finishers, respectively. A total of ten student teams participated in the student portion of the event.

The day-long event was topped off by friendly adult-bracket races. Competition for the fastest car was fierce, but in some races, winning had as much to do with speed as it did with style. Either way, efforts in both categories were impressive and entertaining! The top teams included independent racer Nick Walters and Dobrusin’s downtown business neighbors LocalHop and First Presbyterian Church of Pontiac.

Now in its second year, the Phoenix Derby Races are made possible through significant involvement from our community neighbors and partners. Special thanks to Dobrusin Law Firm shareholder Daniela Walters and Community Outreach Coordinator Marijayne Renny, two of the event’s primary coordinators. In addition to The Dobrusin Law Firm, sponsors and partners included:

Thank you to everyone for making the Phoenix Derby Races such a great educational and family-friendly event. We look forward to next year’s competition!