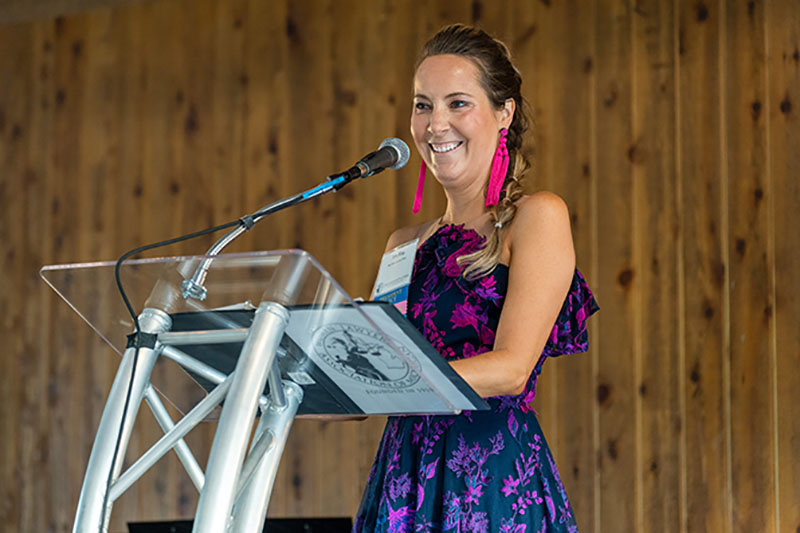 On Friday, June 3, 2022, the Women Lawyers Association of Michigan (WLAM) held its 104th annual meeting at the Detroit Zoo. Dobrusin Law Firm shareholder Erin Klug was sworn in as the organization’s president during the program. She has served on WLAM’s board of directors since 2016.

The theme for the 2022-23 year is the Power of the Pack, built on the notion that women can do a lot of good as a group and originating from an idea from Brooke Baldwin’s Huddle. As Erin conveyed in her first President’s Message:

The book discusses the concept of how women unlock their collective power together – by being together, having each other, and leaning on one another. Whether facing adversity (like workplace inequity or a global pandemic) or organizing to make the world a better place, women are a highly potent resource for one another.

Erin is no stranger to leading professional groups. From 2010 to 2019, she served on the board of directors (and president from 2017 to 2018) of the Women’s Bar Association, which represents the Oakland Region of the WLAM. She is also the chair-elect of the State Bar of Michigan’s Animal Law Section Council and an officer with two non-profits – Attorneys for Animals and The Barn Sanctuary.

Nearly 300 attendees enjoyed the festive atmosphere and near-perfect spring weather, taking advantage of the opportunity to reconnect with colleagues and meet “virtual” friends in person. Erin was surrounded by and supported by many of her peers and friends, including colleagues from The Dobrusin Law Firm, the event’s Gold Sponsor.

We congratulate Erin for her inspirational leadership, years of valuable service to WLAM and other organizations, and tireless commitment to our Michigan legal community. We wish her success during her tenure as WLAM’s new president.