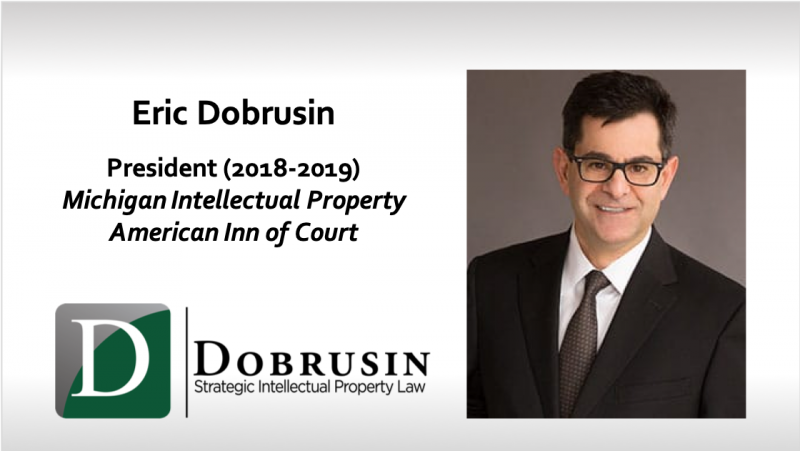 Established in 2012, the Michigan Intellectual Property American Inn of Court (MIPAIC) is a society of judges, lawyers, legal educators, law students, and others who seek to promote excellence in the advocacy of intellectual property. Consistent with other members of the Linn Inn Alliance, MIPAIC is committed to education, collegiality, and the highest ethical values.

After sitting on the executive committee for the previous four years, Dobrusin Law Firm founder Eric Dobrusin served as MIPAIC’s president for the 2018-2019 term, spearheading noteworthy accomplishments during his time in office.

Although a relatively young organization compared to other Inns of Court in the United States, with Eric’s guidance, MIPAIC maintained Platinum Level Recognition, the highest honor in the American Inns of Court Achieving Excellence Program, in recognition of superior administration, communications, programs, mentoring, and outreach.

During his presidency, Eric placed great emphasis on mentorship and networking among members of the MIPAIC. Through his direction and encouragement, the members participated in events such as “Speed Mentoring” and a Quiz Bowl evening to allow pupillage teams to learn more about each other. Under his leadership, pupillage teams were also inspired to participate in community service activities, such as volunteering at Gleaners Community Food Bank. Additionally, as part of its community service outreach efforts, MIPAIC proudly supported the Arthritis Foundation, placing sixth among fundraising teams for the 2018 Detroit Jingle Bell Run last December. In the educational area, the Inn hosted the Register of Copyrights and Director of the U.S. Copyright Office at a well-attended Copyright Legal Forum at the University of Detroit Mercy School of Law in February 2019.

We congratulate Eric on his successful leadership of MIPAIC over the past year and thank him and his fellow board members, including Dobrusin Law Firm managing shareholder Kristen Pursley, for stewarding the organization to national recognition.