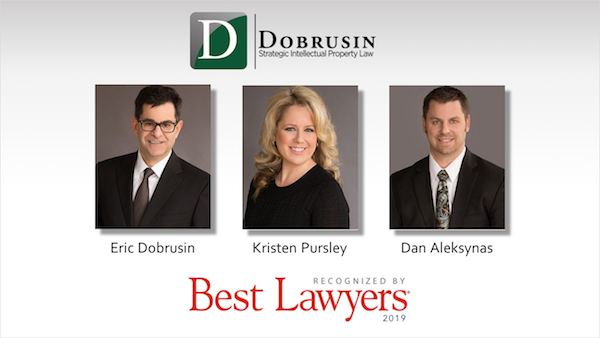 The Dobrusin Law Firm is pleased to announce that Eric Dobrusin, Dan Aleksynas, and Kristen Pursley have been selected for inclusion in the 2019 edition of The Best Lawyers in America©.

Mr. Dobrusin, a founder and shareholder of the firm, has more than twenty-five years of experience in intellectual property law. He focuses his practice in patent counseling and strategic patent prosecution, with particular emphasis in the fields of materials science, biomedical technologies, and automotive technologies. He has been recognized by Best Lawyers each year since 2007.

Mr. Aleksynas, also a shareholder, prosecutes domestic patent applications before the U.S. Patent & Trademark as well as applications filed internationally, with an emphasis on automotive technologies and medical devices. He initially appeared in the Best Lawyers 2017 edition.

Ms. Pursley is the firm’s managing shareholder and represents tier-one automotive suppliers, medical diagnostic and device manufacturers, and consumer product and packaging producers in intellectual property matters. She has been included on the Best Lawyers list annually since 2016.

The three attorneys are also the co-authors (along with Ronald Krasnow) of Intellectual Property Culture: Strategy & Compliance, published Lexis-Nexis/Matthew Bender.